What’s permaculture got to do with Extinction Rebellion?

You’ve likely already heard about the group of climate activists who’ve been protesting and demanding that politicians and governments tell the truth about climate change and take action. Using tactics of mass civil disobedience and voluntary risk of arrest, thousands of people took to the streets of London last November followed by thousands more in April this year. They’ve been extremely successful in getting the mainstream media to finally pay attention to the climate crisis and have helped influence the government into declaring a climate emergency.

One of the reasons that they’ve been so successful is the observation and interaction that the founders had been carrying out prior to launching the movement. Both of the founders had previously engaged in and learnt from social change movements. They then used their collective experience, built on it and expanded it out into what we now know as Extinction Rebellion.

It's this building on and expanding out that I think has been one of the distinctive factors of XR (Extinction Rebellion). Along with its many other successes the movement has successfully used edges to bring thousands of people together on the issues of climate change and climate justice. Using replicable and adaptable talks, people could share the central message and calls to action, resulting in XR groups popping up all over the country and in other parts of the world. These localised groups have then been able to further interact with edges amongst social groups in their towns and cities.

Within these groups the diversity of the people has been valued and used to further the movement. The decentralised organisation means that the groups have autonomy to take action in their local areas. As these more localised organisations grow they split off, creating even more diversity and edge while maintaining the core messages.

Obtaining a yield has been key to the XR movement. They have three very clear asks:

These ambitious yields work as a measure of success as well as a way to keep such a large number of people aligned with one another. 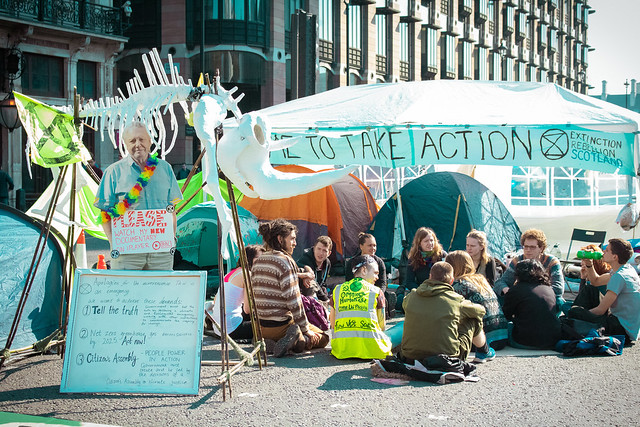 Over the past few months I’ve spoken with a number of people who've taken part in civil disobedience, protests or have been contributing to the movement in one way or another. The amount of work that’s going on is phenomenal but I can’t help thinking we could be doing more with this yield of people, many of whom are engaged in the multiple issues of climate change and climate justice for the first time.

The climate crisis is a huge and often overwhelming issue and it’s sometimes hard to know where to begin. This is where I think permaculture can help. Thousands of permaculture designers have been working to regenerate ecological diversity and mitigate the climate crisis since the 1970’s. We certainly don’t have all the answers but we do have a solutions and systems based design framework that can help people use their experiences and knowledge to formulate answers to our climate crisis and ecological breakdown.

Recognising the skills that will be required in both mitigating and adjusting to the climate crisis, we’ve invited Dr Rupert Read to the Park House Permaculture Design Course taking place in July to teach a session alongside Deepak Rughani, himself a busy Extinction Rebellion campaigner.

Dr Rupert Read teaches Philosophy at the University of East Anglia, has been a green party politician since 2004 and is a campaign strategist for Extinction Rebellion. Deepak Rugani is an ecologist and co-director of environmental campaign group, Biofuelwatch, which campaigns to stop the destruction of ecosystems for bioenergy.

Deepak Rugani and Dr Rupert Read will lead a session speak about leadership in the environmental crisis and the role that the permaculture principles of ‘Earth Care, People Care and Future Care’ can play in mobilising change. Click here to find out more about the course

Find out more about the course