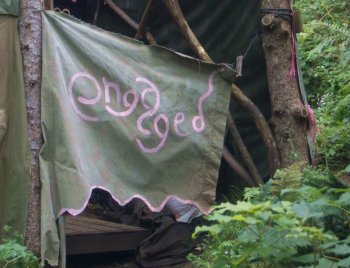 We have been culturally led to think of composting our bodily wastes as being unhygienic, but in fact if we deal with them in that manner, they create no pollution. What’s more we also get the added bonus of good compost, which keeps the fertility on the land where it belongs. We have only been able to be so wasteful with those important nutrients, flushing them all out to sea (where they kill masses of marine life), because we import so much food from abroad. And every time we eat imported food, we are effectively robbing those other countries of their own soil fertility.

I’m not completely clear what time of year the series is meant to be set in, but I’m guessing it’s supposed to be spring. That would be pretty fortuitous for them, the same thing happening in November might reduce their survival chances considerably. The food supplies in the shops aren’t going to last for too long and I’d like to see at least one of the cast having the foresight to realise that seeds don’t grow into food overnight. Why haven’t they gone straight down to the garden centre and salvaged as many as they can? And gardening books too if they need to learn what to do? Come on, get started on your garden!

Perhaps we are just too disconnected from these important things these days. How many of us in the same situation could grow our own food? Or light a fire without matches? Martin Worth, one of the scriptwriters from the original Survivors series, was interviewed on Radio 4 this week. He felt that the 1970′s generation was much better equipped to survive than we are now. And back then we were certainly more aware of self sufficiency, through John Seymour’s best selling book & of course from watching ‘The Good Life‘ on TV.

The new series has the opportunity to remind us of our biological vulnerability. I hope that it makes some of these other important points, because we all need waking up to our almost total dependence on fossil fuels, electronic technologies and supermarket foods. We saw what happened to New Orleans and how quickly everything there fell apart. Let it be a warning that we learn well from.

We have created an amazingly complex society, but it is really just a house of cards. In the series, everything collapses very quickly, and while that may be hard for us to believe, it’s probably very close to what would actually happen. The good news is that we do have solutions ~ plenty of them! We just need to start putting them in place now before it’s too late. Wake up from your cosy comfort zone! It’s time for us all to join the great re-skilling, so if (perish the thought) such a terrible thing were to happen in the near future, we would at least be in some way prepared.