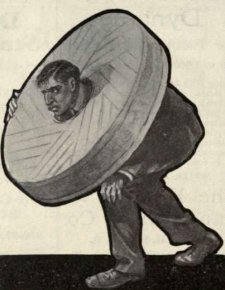 It’s traditionally the time of year again to give our homes a good ‘Spring clean’. I guess back in ‘the old days’, warmth was too precious to be opening doors until it was warm enough outside, so a smelly winter indoors was probably inevitable! Vacuum cleaners have of course removed the excuse for us to leave cleaning things that long, but affluence has brought with it a different problem. Clutter!

It seems to be the in-thing nowadays to have people come in and get rid of your clutter for you. Many of us have big emotional resistance to this, but we know on some level that it makes sense. Paying someone else to do it for you seems a big drastic to me (and scary!), but if, like me you’re looking for one more good reason to get on and have a good clear out yourself, then read on…

The millstone around the neck is a powerful metaphor for life’s responsibilities, but in a society that values the ownership of material goods, it can be difficult for us to recognise the ways in which our ‘stuff’ burdens us too. What we need is a clear sense of the time, energy and space it takes to keep something in our possession, but first let’s look at how nature does things.

In nature, there is no such thing as waste. Once a tree has finished with the skeletons of a season’s leaves, it sheds them, but where do they go? Somewhere else? Of course not, nature makes good use of them where they fall, because species have evolved to make use of those leaf skeletons as food. Worms are among these creatures and in turn, the casts that they leave behind are fed upon by microbes and so on, until maybe eventually being fed upon by the tree again.

A key concept that we learn from nature is that resources are always on the move, they do work in one place and then are passed on to the next. Trading occurs abundantly in nature! Those trees don’t hang on to their leaves for fear that there will not be enough in the soil the following year to grow more. Anything surplus to requirements at the time is let go of, and the reason for this is that it takes energy to maintain everything, so if it isn’t doing something useful, it’s not worth keeping! Deciduous trees shed their leaves to avoid moisture loss over the winter months; the disadvantages of keeping them outweighing the advantages, so they are let go.

This is where we get to an important concept in permaculture; what occurs at the boundary (edge) between things. We’ve established that resources are constantly on the move in nature, but in order to do so they have to keep crossing boundaries, and that isn’t always easy. Think of a meteorite falling from the sky and lucky enough to reach the ground without burning up. Even with all the inertia it has, it will still struggle to cross the edge between the ground and the atmosphere very far. This is because edges have to act as both nets and filters at the same time. The net quality is essential for keeping important resources in and maintaining separation from the surrounding environment, and yet exchange is also vital for survival, hence the need for a boundary to efficiently filter what is allowed and not allowed through it.

We find boundaries everywhere of course (e.g. particularly between earth and atmosphere, land and water), but intriguingly this is also where we find most life. And why do we find most life there? Is it because these places provide access to the most resources, or is that just a by product of what life is already doing there?  One thing is certain; that life dramatically increases the rate at which resources are able to travel across those boundaries, and while doing so, harvest off some of them to increase the efficiency at which they perform this function. It’s a beautiful system!

By way of an example, we’ll return to our tree with its roots in the earth and its branches in the atmosphere. Without the tree, there can still be exchange between earth and atmosphere, but it is slow. The tree provides considerably more surface area to this edge (above ground, trees have between forty and four hundred times the surface area of leaves, for photosynthesising and respiring, as the ground area they cover).  So as resources pass through the tree, the whole system benefits from an increase in efficiency. The tree is actually a connection between earth and atmosphere; a ‘translator of energy’  across the boundary, relieving the ‘stresses’ that would otherwise build up along this edge.

So how does this relate to our clutter?

Well, we too are performing the same function as the tree in making the movement of resources a more efficient process ~ or at least we should be! Our bodies still do this fairly well; we eat food and regardless of how well we process it (that’s another post!), most of it passes out the other end and is returned into the natural cycle. What we have started to do which is so different from the rest of nature, is to begin to store excessive resources, many of them of no immediate value, in external storages (our homes). Certainly, we find examples of animals saving food for the winter, either as body fat or buried stores, but these are only ever temporary strategies to get them through food shortages. 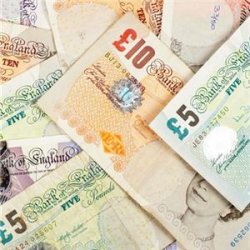 Is our ability to consider future possibilities, that something might be useful ‘sometime in the future’,  actually making life harder for us? How much of what you have in your home is actually of use to you now? Of those things that aren’t (and I suspect there may be a few), can you think of anyone else that might be delighted to have that thing and make great use of it?  Think of the joy you could bring to those people.

How much of your home space is taken up by such things?  How much time do you spend cleaning them? How much did you pay (are you paying?) for that extra space? Could you be living somewhere smaller? How much cheaper would your house insurance be if you lived there?

How many extra hours a week do you work, to pay for that extra space that’s filled with your useless stuff?

If you do the sums, I think you’ll find enough of a reason to get started now.

Oh, if you’re wondering where you might someone who be grateful for ‘this’, then try your local freecycle network. And while you do so, consider how much more efficient you’ll become as a ‘translator of energy’.

Doesn’t that make you feel good?